This article provides an overview of the Philippines for those keen on exploring the possibility of living and working there. The information presented is gathered from open sources and is not exhaustive or meant to supplement or substitute legal and professional advice. 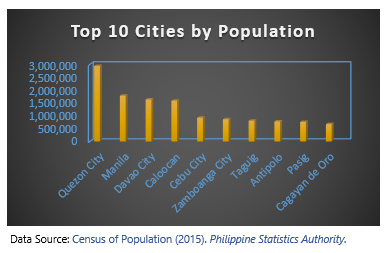 Manila is the capital city of the Philippines while Quezon City is its most-populous city. Both are part of the National Capital Region (Metro Manila), located in Luzon, the largest island.15 Other major cities in the Philippines (according to population) include Davao City, Caloocan, Cebu City, Zamboanga City, Taguig, Antipolo, Pasig and Cagayan de Oro.16

The four industries that are expected to contribute to the economy’s growth in the next few years are construction, tourism, manufacturing and services. With the government’s focus on infrastructure, local and international construction firms are likely to benefit from an increase in opportunities and projects in the Philippines. Within the manufacturing industry, petroleum, transport equipment, beverage industries, and food are the top contributors to economic growth.

The tourism industry is one of the country’s fastest-growing industries, due to an increasing number of tourist arrivals to the country. In 2016, the largest improvement in services was the education sector, which grew to 7.5 percent, followed by hotels and restaurants (6.2 percent) and recreation (5.1 percent).19

In 2017 , the country’s total external trade in goods was US$75.586 billion, expanding by 15.3 percent from US$65.579 billion in 2016. Total import payments went up by 14.3 percent and total export receipts grew by 16.6 percent. Electronic products continued to be the top earner in 2017, comprising 49.8 percent share of total exports. Manufactured goods, and machinery and transport equipment were second and third, contributing 6.9 percent and 6.5 percent respectively to total export receipts. 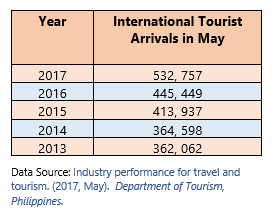 The Philippines is described as a “safe and fun destination” for tourists. The Philippines Department of Tourism’s tagline is: “It’s more fun in the Philippines.” The country has many touristic offerings, including natural wonders; historical landmarks; culture and tradition; arts and crafts; shopping; and recreation and entertainment. Tourism activities thrive in the country’s different regions, each with its own unique destinations and products.21

For the month of May 2017, visitor arrivals reached a total of 532,757, an increase of 19.6 percent compared with the May 2016 visitor count of 445,449. This positive growth in arrivals can be attributed to aggressive marketing efforts as well as international events, such as the ASEAN@50 meetings, held in the country.22